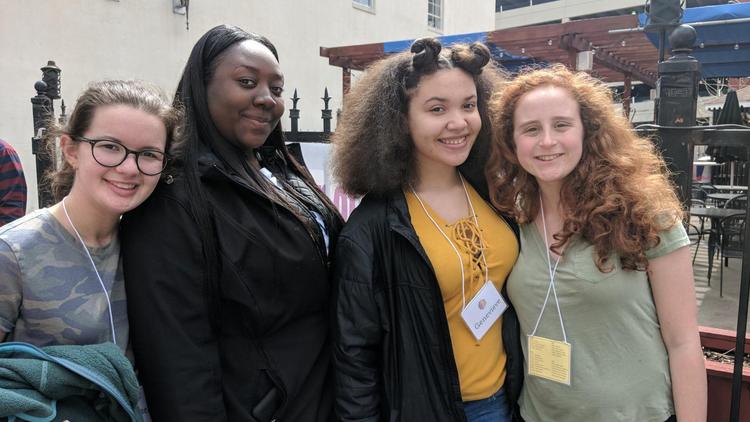 Mia Strubel-Iram, from left, Brianna Williams, Genevieve Hicks and Aviva Kaplan in Little Rock, Ark. The students traveled as part of the “Let’s Get Together: An Interfaith Journey Toward Justice” program. (D’ror Chankin-Gould)

“This trip has shown me that in the past we made changes
and we need to reconnect with how our two cultures used to be a team.”
Simon Adams, age 16, Chicago

“I was really afraid to meet different people that was outside of my comfort zone,” said Hicks, 16, of East Chicago. “So when I heard (the trip) would be Jewish children and African-American children, I was kind of scared because I thought I wasn’t like them in a way.”

The trip, which took place last week, was for Chicago-area African-American and Jewish teenagers in grades 9-11. The goal was to learn about each community’s history, build student leaders, teach them how to advocate for social justice, all while making meaningful friendships.

D’ror Chankin-Gould, the project manager of the trip, said that the program depicted a commitment to bridging the cultural gaps in Chicago.

“Chicago is so segregated that we don’t have a chance to get to know each other,” said Chankin-Gould, a rabbi at Anshe Emet Synagogue in Lakeview, one of the seven sponsors and organizers of the trip. “So this is our best attempt in shifting that dynamic, starting with young people, and giving them a chance to name their differences and find their common ground and work together.”

Various landmarks and museums along the group’s voyage offered historical context to help the students better explore their present communities.

In Memphis, the students visited a civil rights museum, as well as the church where Martin Luther King Jr. preached before he was assassinated. In Little Rock, they went to Little Rock Central High School and learned about integration and the Little Rock Nine. They also spent time learning about Jewish history and anti-semitism.

Next was St. Louis, and there the group went to a reform synagogue to meet with a rabbi and hear about the social justice work being done there. They saw the stage play of “The Color Purple,” too, and talked to the actors afterward.

Finally, in Springfield, the cohort met with legislators and advocates to talk about how teens can get involved in making change. They visited the Abraham Lincoln Presidential Library and Museum, and the Springfield and Central Illinois African-American History Museum.

Simon Adams, 16, of Uptown said that because of this trip, he’s ready to go home and make some changes.

“This trip has shown me that in the past we made changes and we need to reconnect with how our two cultures used to be a team,” he said. “In order to create a better, brighter future with more justice and equality, we need to unite these groups that have been attacked throughout history and realize that we have amazing similarities. Once we become a team again, we can do so many good things in the world.”

The concept for “Let’s Get Together” came about almost five years ago as the byproduct of a long friendship between Michael Siegel, senior rabbi at Anshe Emet Synagogue, and Chris Harris, senior pastor at Bright Star Church in Bronzeville, another sponsor and organizer of the trip.

“Michael and I were at an event together, and we were asking the question, ‘Why is it that the African-American and Jewish communities are not still walking together, marching together in lock and step like they used to?’” said Harris. “And so, we started to say one of the best ways to do that is if you bring children together, young people together.”

“And as we’ve gone forward,” added Siegel, “we’ve sought more and more about how to engage youth and how to build those meaningful relationships because the reality is that when you are in a relationship with someone, you carry their pain and their joys forward with you. You don’t simply turn the page or turn it off when it’s no longer in front of you. In order for us to go forward, we have to build real relationships that are going to lead us to real, sustained actions. And that’s where this trip comes into play.”

Hicks was able to create these relationships despite her initial fears.

“I’ve always been afraid to talk to someone because I was afraid that I wouldn’t sound as smart as them or carry myself in a way that they would approve of,” she said. “But once I got to know them better, I gained a lot of friends that I can be myself with, and they can be themselves, and we can still be friends and talk about mature conversations — or not even mature but conversations that teenagers have.”

Adams also found mutual connecting points with the other teens.

“As soon as I got on the bus, people were singing in the back. And I went back there, and I just started singing,” he said. “I didn’t know some of the songs, but we sang for like two hours on the bus ride. Now they always want me to sing, and I’m losing my voice. And that’s fine!”

In the wake of all that’s been happening in the country, and with the 50th anniversary of Martin Luther King Jr.’s assassination, “it makes sense for this perfect time, where racial tensions are at an all time high,” said Harris.

The trip deeply affected Hicks too.

“Now that I’ve been on this trip and I’ve been able to talk about the things I felt and believed in and people listened to me, I feel like I’m able to speak way better than before. At first I was afraid to speak out on things, but it felt good for them to listen, and now I have more confidence in myself.”