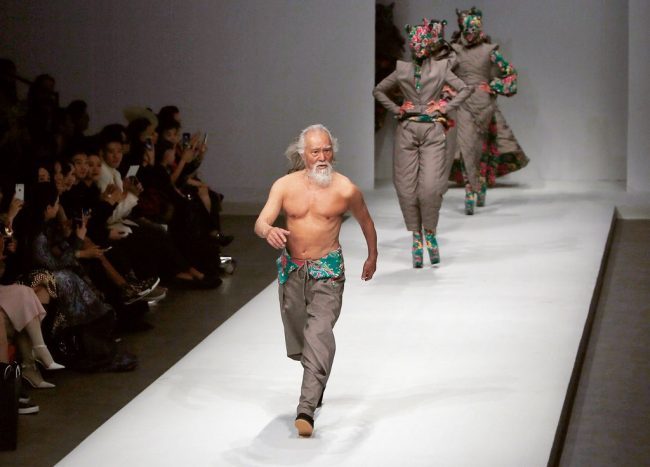 BEIJING — Before cranking up the techno music at his 80th birthday party, the man known as “China’s hottest grandpa” paused from his D.J. duties to poke fun at the country’s staid traditional celebrations for the elderly.

“I should wear a long robe, with the word ‘longevity’ embroidered on the front,” the birthday boy, Wang Deshun, said at his party in September.

Far from looking frail, the silver-haired actor, model and artist wore a crisp white shirt and black jeans, his back straight and his eyes glittering with humor.

“Two young maidens should help me into an old-style wooden chair,” he added, pretending to hobble.

Determined to avoid mental and physical stagnation, Mr. Wang has explored new skills and ideas while devoting ample time to daily exercise. Last year, he walked the runway for the first time, his physique causing a national sensation. He takes obvious joy in subverting China’s image of what it means to be old.

And old age in China begins relatively early. The legal retirement age for women is 50 for workers and 55 for civil servants, and 60 for most men.

Being older in China typically means being respected, but also, often, sentimentalized. Someone as young as 50 may be addressed as “yeye” or “nainai” — grandpa or grandma — regardless of whether they have offspring.

Mr. Wang is having none of that.

“One way to tell if you’re old or not is to ask yourself, ‘Do you dare try something you’ve never done before?’ ” he said in a recent interview at a hotel in Beijing.

“Nature determines age, but you determine your state of mind,” he said.

Mr. Wang has not escaped being called grandpa — he has two children and a 2-year-old granddaughter — but the honorific is accompanied by accolades for his vigor and his embrace of the new.

“Grandpa, you’re my idol!” one admirer wrote on Mr. Wang’s Weibo social media account, one of thousands of similar comments.

Sex appeal is part of the mix.

“Grandpa, your stomach is so gorgeous! Incredibly handsome!” another person wrote next to a photo of Mr. Wang, topless in a gym, his skin smooth and pectorals buff.

Mr. Wang said he was always athletic. An avid swimmer as a child, he still swims more than half a mile each day. “Morning is my learning time,” he said. “I read books and news. From 3 to 6 p.m. is my exercise time, in a gym near my home.”

He also drinks less alcohol now, he said, but that is about as far as his dietary restrictions go. “I am not picky at all about what I eat. I eat whatever I want.”

Mr. Wang was born in the northeastern city of Shenyang in 1936, one of nine children of a cook and a stay-at-home mother. At 14, a year after the Communist Party came to power in 1949, he began working as a streetcar conductor.

“I liked acting, singing, dancing, playing musical instruments so much that I joined my work unit’s band,” he said. At the Workers’ Cultural Palace in Shenyang, he took free lessons in singing, acting and dancing. He later took a job at a military factory and joined its art troupe. Sometimes they entertained soldiers.

“Even if there was just one sentry, say, at the top of a hill, like once in Dalian, we’d surround him and perform,” Mr. Wang said.

Later he worked in radio, film and theater. In the early 1980s, Mr. Wang, who would teach runway modeling at a Beijing fashion school, staged what he believes was the first modeling show in the northeastern city of Changchun.

“In 1982, the clothes Chinese wore were so out of date,” he said. “I went to the city’s biggest department store and told the sales clerks, ‘Give me your nicest clothes, and I’ll organize a show.’ They agreed. The best clothes they had were fur coats, and for men, woolen Sun Yat-sen suits” — also known as Mao suits.

Back then, he said, “Chinese had no sense of color or style. People wore black, white, gray or blue. Some people wore army uniforms. I wanted to start a sense for fashion among ordinary people. We did a swimming-suit show. The girls refused at first, thinking it was indecent. But I insisted.”

By 49, Mr. Wang was eager to move to Beijing, China’s cultural capital. He wanted to be a “living sculpture.” He also needed money.

He began working out, determined to have a lithe body that would allow him to interact, almost naked and covered in metallic paint, with copies of Auguste Rodin’s and Camille Claudel’s sculptures of women. The idea, he said, came from his wife of 48 years, Zhao Aijuan.

After the first show in Beijing, in 1993, the authorities, disturbed by its sensuality, barred Mr. Wang from performing in public. He continued to perform privately. 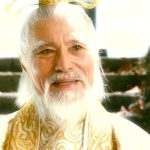 “I really admire him very much,” said Xiao Lu, 54, a performance artist. “I do body art, and you know, after a certain age. a person’s abilities decline. But he has this amazing sculpted body and spirit. Such power for life really comes from the inside. He makes the feeling that’s in the Rodin sculptures come alive.”

His appearance on the runway earned him a cultlike following. Some fans call him laoxianrou, or “old fresh meat,” making a play on the word for teen idol: xiaoxianrou, or “young fresh meat.’’

Perhaps not. But Mr. Wang’s physicality, notable in a society where men rarely highlight their attractiveness, also sets an example in a nation that is growing older fast.

“People can change their life as many times as they wish,” he said. Having a goal is important, he said.

“Being mentally healthy means you know what you’re going to do,” he said. “For example, a vegetable vendor, when he wakes up, he has a goal, he works hard. And when he finishes, he feels fulfilled.”

And one day soon, he said, parachuting. That is the plan.