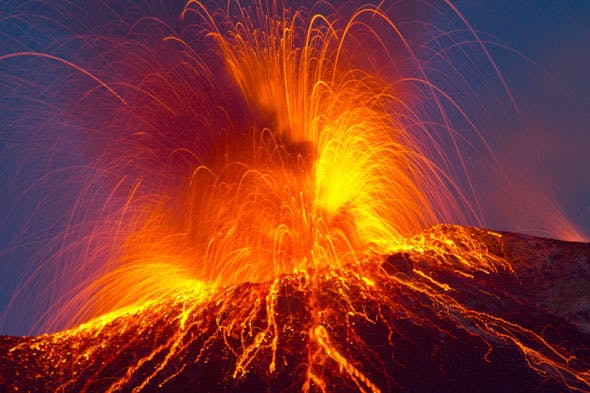 In the Hawaiian religion, Pele, the Fire Goddess, is the goddess of fire, lightning, dance, wind and volcanoes and the creator of the Hawaiian Islands. Often referred to as “Madame Pele” or “Tūtū Pele” as a sign of respect, she is a well-known deity within Hawaiian mythology, and is notable for her contemporary presence and cultural influence as an enduring figure from ancient Hawaii.

In different stories talking about the goddess Pele, she was born from the female spirit named Haumea. This spirit is important when talking about Hawaii’s gods due to how she is a descendant from Papa, or Sky Father, who is a supreme being. Due to Pele being born, she has become a notable deity known to the Hawaiian culture. She is also known as “She who shapes the sacred land,” known to be said in ancient Hawaiian chants.

The Hawaiian (Polynesian) goddess of the volcano, Pele was born in Honua-Mea, part of Tahiti. One of a family of six daughters and seven sons born to Haumea (a very ancient Earth goddess) and Kane Milohai (creator of the sky, earth and upper heavens).

There are a number of variations in the legends that tell of how Pele first came to the Hawaiian Islands. One of the most common relates that she was exiled by her father because of her temper. The final straw being a fighting with her elder water-goddess sister Na-maka-o-Kaha’i, whose husband Pele had seduced.

Pele’s oldest brother, the king of the sharks, Kamohoali’i, gave her a great canoe, upon which she and her brothers traveled far from home, over the wide expanse of the seas, sailing on this great canoe eventually to find Hawaii.

All the while, Pele battles with her sister Namakaokahai who is a Sea Goddess. During this perilous journey she carried her favorite little sister, Hi’iaka in egg-form all the way to the Hawaiian islands. That makes Hi’iaka the first God of the Pele family to be born in Hawaii.

When Pele got to Hawaii, she first used her Pa’oa, or o’o stick on Kauai — striking deep into the earth but she was attacked by her older sister and left for dead. She was able to recover and flee to Oahu, where she dug several “fire pits,” including the crater we now called Diamond Head, in Honolulu. After that, she left her mark on the island of Molokai before traveling further southeast to Maui and creating the Haleakala Volcano.

By then her older sister Namakaokahai, realized Pele was still alive and she went to Maui to do battle. Finally, the epic battle ended near Hana, Maui, where Pele was torn apart by her sister. Legend says her bones remain as a hill called Ka-iwi-o-Pele.

Upon death, she became a god and found a home on Mauna Loa, on the Island of Hawai’i. There she dug her final and eternal fire pit, Halemaumau Crater, at the summit of Kilauea Volcano. Known as the Navel of the World, Ka Piko o ka Honua — were the gods began creation. She is said to live there to this day and is thought to be very happy there.

In 2003 the Volcano Art Center had a special competition for Pele paintings to replace one done in the early 20th century. Over 140 paintings were submitted, and finalists were displayed at sites within the park. The winner of the contest was Pahoa, Hawaii artist Arthur Johnsen. 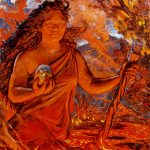 Many Hawaiians believe Kilauea to be inhabited by a “family of fire gods”, one of the sisters being Pele, who is believed to govern Kilauea and is responsible for controlling its lava flows.