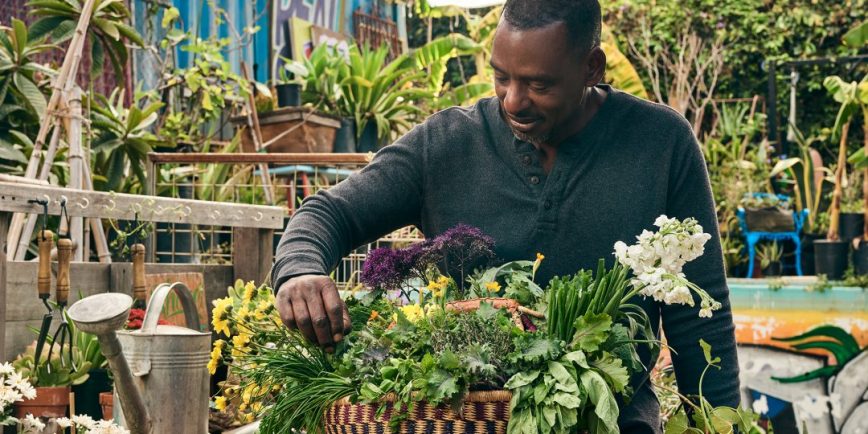 Meet Ron Finley, a man who will not sit still and watch a problem take root. Having grown up in the South Central Los Angeles food prison, Ron is familiar with the area’s lack of fresh produce. He knew what it’s like to drive 45 minutes just to get a fresh tomato.

In 2010, he set out to fix the problem. Outside his front door, that is. Ron planted vegetables in the curbside dirt strip next to his home. And quietly, carefully, tenderly started a revolution. I wanted a carrot without toxic ingredients I didn’t know how to spell, says Ron.

His was an exceptionally creative, cost-effective and simple solution; however, it was also an act of spirited rebellion that led to a run-in with the authorities.

The City of Los Angeles owns the “parkways” the neglected dirt areas next to roads where Ron was planting. He was cited for gardening without a permit. This slap on the wrist did little to dissuade his green thumb. So Ron fought back. Hard. He started a petition with fellow green activists, demanding the right to garden and grow food in his neighborhood and then, the city backed off.

This caught the eyes of creative leaders and media voices that lauded his courageous act of ebullient defiance. Ron has continued to share his story and vision with the world, giving a TED talk and planning many exciting ways to continue his involvement in mitigating Los Angeles food prisons. Website