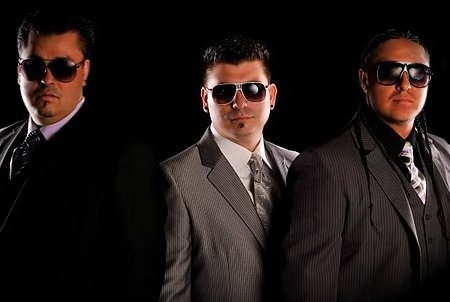 The Soulful Harmonies Of DW3

DW3’s warm, sexy, high-energy performances electrify audiences. It’s impossible to sit still when they’re on stage. No matter what the venue, people are up and dancing throughout the show. Those shows have become more wide-ranging year by year.

You’re probably familiar with the soulful harmonies of DW3 from their Billboard charting hit single, “I Got You,” which appears on their third CD On The Floor, produced by the legendary Paul Brown and featuring saxophonist Gerald Albright. Or maybe you’re a fan of the Latin group Tierra, in which case you’ve been listening to Billy Mondragon, who’s been their lead vocalist, for 20 years. Billy and his brother Eric Mondragon are the founding members of DW3, with singer Damon Reel rounding out the threesome. Their band is always comprised of a rotating mélange of L.A.‘s finest musicians supporting the vibey R&B, Jazz and Latin soul vocals for which DW3 is so well-known .

They have called Spaghettini Jazz club in Seal Beach, CA their home for the last decade, performing at the live broadcasts of the Sunday Brunch with 94.7 The Wave radio station and in concert various evenings at the club. They’ve also sung backgrounds with Sheila E., Marcus Miller, George Duke, Brenda Russell, Patti Austin, Bobby Caldwell, Jody Watley, Brian McKnight, David Pack, Evelyn “Champagne” King, Mindi Abair, Jonathan Butler and many other artists. Get to know DW3 better by clicking on the player above to hear our conversation with music. Check out their website here.