Russ Freeman And The Rippingtons 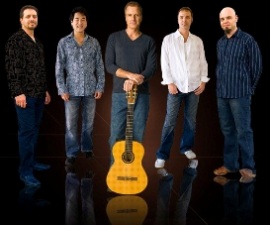 It takes a lot to be an innovator and make a success of it. Russ Freeman, the founder and leader of the Grammy nominated Rippingtons brings a lot of talent and smarts to the table and has made an impressive mark on the world of contemporary jazz with his original creation. Among the most popular groups in the history of the genre, The Rippingtons began their pioneering sound 25 years ago and are still innovating and producing hit records, the latest being the aptly named, “Built To Last.” Indeed they are.

Guitarist/composer/producer Freeman is that rare combination of equal parts creative visionary and astute businessman. He handles both roles with grace, finesse and the admirable determination to be true to his own artistic vision. That vision encompasses a band who’s line up has included Dave Koz, David Benoit, Jeff Kashiwa and others who’ve gone on to have thriving solo careers after their stint with the Ripps. Russ continues to discover and foster great talent, with the most recent addition to the Rippingtons, bassist/multi-instrumentalist Rico Beled as a prime example.

An avid traveler and explorer of life in its many aspects, Russ converts these interests into art. Numerous hit albums reflect this passion with themes and titles such as: “Tourist In Paradise;” “Cote D’Azur;” “One Summer Night In Brazil;” “St. James Club;” “Caribbean Breeze;” “Weekend In Monaco;” and a host of others that have delighted multitudes of fans from around the world for a quarter of a century.

Russ Freeman’s significant accomplishments as a musician and band-leader are further enhanced by his respect and gratitude for his fans, a penetrating intelligence and a charming, easygoing and humorous personality. A winning combination. You’ll hear it and learn more about this perennial smooth jazz favorite in our recorded interview. Click on the player below to hear our wide-ranging, revealing conversation and a couple of new tracks from the latest CD, “Built To Last.” Visit The Rippingtons website here for more information.