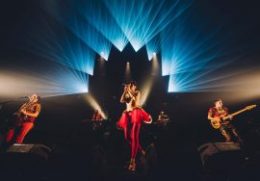 The six members of Deluxe live within a 100-metre radius of each other in Aix-en-Provence, an idyllic city in the south of France. The birthplace of Paul Cézanne, it’s filled with leafy boulevards, narrow cobblestone streets, 18th century mansions and moss-covered fountains. It hosts one of Europe’s biggest opera festivals each summer and is also home to thousands of university students, who spill out of the city’s clubs at 4am.

Deluxe got its start by busking on the streets of Provence back in 2007. The troupe had many musical influences – funk, hip-hop, jazz, soul, big band, pop – and a contagious energy that regularly stopped passersby. Fast-forward a decade and Deluxe is playing to audiences of 6000 people at Le Zénith – one of Paris’s largest music venues.

“It was not one big break,” says Elisa Poublan, aka Liliboy, of their success. Poublan is the band’s vocalist, joining existing members Kaya, Pietre, Kilo, Soubri and Pepe five years ago.

“It was gig after gig – I think we did maybe 400 – and every year we were just playing, playing, playing. People talked about us because they saw us on one stage, so they would talk to their friends, who would see us on another stage. It was really exciting to get to a point where we’re playing Le Zénith.”

It was word of mouth, in other words, which established Deluxe as a mainstay on the festival circuit and a band that tours extensively to all corners of Europe. Its performances in Melbourne and Sydney in January as part of So Frenchy So Chic 2017 will be Deluxe’s Australian stage debut.

So far, the band has released two LPs: Polishing Peanuts in 2011, and Stachelight, in 2016. The latest album showcases Deluxe’s signature genre-blurring, multi-instrumental style, and, in its name and on its cover, pays homage to the band’s longtime emblem: the moustache (also an indispensible stage accessory – count the moustaches on stage in January).

While Deluxe has recorded a couple of songs in French and plans to do more, the band mostly writes and sings in English. “We listen to so much English-speaking music that it’s more natural,” Poublan says. The band collectively lists The Roots, Curtis Mayfield, Jurassic 5 and D’Angelo as influences, while Poublan singles out American sisters Cocorosie.

To date, the furthest Deluxe has played from home is China. Poublan is excited by the fact that Australia is as far, geographically, from France as the band has ever performed (plus, she’s looking forward to seeing a kangaroo). Of the So Frenchy So Chic crowd, she has only a few requests: “Lots of moustaches, lots of dancing. And we hope the Australian audience will smile enough to make us come again many times.”

Each track on Stachelight was recorded live to recreate the energy that has defined the band since its early days, says Poublan. The six-piece still busks for fun, and even used to do so while being interviewed. “We do some bad busking at 9am in the morning on Skype!” Poublan says, laughing. “It’s not very good music!”