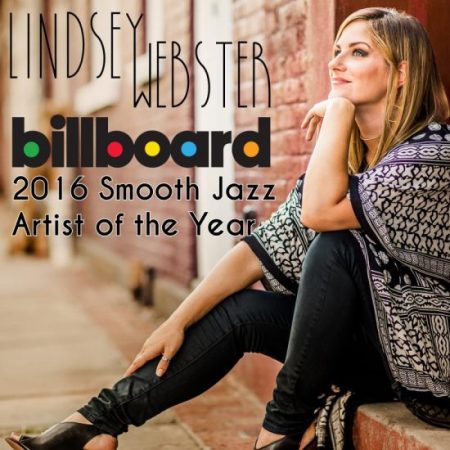 Growing up in an artist community, the daughter of loving hippie parents, in Woodstock NY, the allure of music was never far from Lindsey Webster.

The adorable, instantly likeable and earthy singer/songwriter, who grew up listening to her parent’s Jimi Hendrix, Beatles and Elvis Costello LPs and later the Supremes, once pursued medical school before finally settling on music.

Webster has been taking the contemporary jazz world by storm, scoring a  #1 hit with her soulful original “Fool Me Once.”

This feat is remarkable in numerous ways. Not only is Lindsey half the age of the male instrumentalists who dominate the genre, but her #1 is the first vocal driven song that has topped the Billboard smooth jazz chart since Sade’s “Soldier of Love” in 2010.  Lindsey exclaims:

“This honor has changed the game for me. Once a dream comes into fruition, it really lights a fire.”

“Lindsey Webster is an extraordinary vocalist who effortlessly melds R&B and jazz in a uniquely appealing ‘jazzy soul’ style that instantly connects with audiences and the world is already taking notice!”

Influenced by everyone from Mariah Carey and Christina Aguilera to Steely Dan and Earth Wind and Fire, there is an honesty and authenticity that reverberates through Lindsey Webster’s enchanting, smoky, rich and soulful honey-toned pipes. Joining forces with her husband, pianist and musical partner, Keith Slattery, the duo crafts evocative soundscapes that fuse the best elements of R&B, jazz, pop and soul.

“The knowledge, style and intuition that Keith brings to my songs is amazing,” says Lindsey of her husband. “Keith and I are extremely passionate and sensitive people who put the same pride and perfectionism into our writing, recording, and producing. Our philosophy is simple, we do what feels right. I believe this is what has helped us to forge our own sound.”

The lead single on Back To Your Heart is the album’s title track.  It’s an intoxicating and emotive number that sizzles and a song that Webster said wrote itself.

“Keith was coming up with the idea for the chorus upstairs on his keyboard one day and I was downstairs cleaning,” she shares. “Once he got the chord progression going and played it a few times, the words ‘You gotta show me the way back to your heart’ popped into my head.”

Back To Your Heart is a revealing and intimate portrait of Lindsey Webster’s life. There are songs like “On Our Way,” about Lindsey’s personal path and the principals of the Laws of Attraction and her heartfelt and moving tribute to her mother Barbara, who passed in 2014.  “One At A Time,” was inspired by the Black Lives Matter movement and an inspirational speech that saxophonist Kirk Whalum (who guests on the song) gave at one of his concerts about the power of everyday Americans. Lindsey shares:

“I realized that one person at a time is how we are going to come to some kind of peace. We have to love and respect and embrace our differences in order to get to the inner peace we need to create widespread peace.”

Lindsey’s mission is to make an emotional connection with her fans. Somewhat of an old-soul, the young singer concludes:

“With all the pop tunes out nowadays, literally about nothing, I think it’s important to hold the torch for the artists before us who found it important to write real music.”

With the release of Back To Your Heart, Lindsey Webster is poised to find her way into your heart…and this is just the beginning!