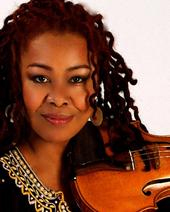 Classically trained violin virtuoso Karen Briggs sizzles in vivid color. Whether it’s as the famed “lady in red” alongside Yanni at the Acropolis or front and center with her latest endeavor, Jazz In Pink, she’s a fiery leonine presence and musical force of nature. Renowned from her years touring with Yanni, Karen’s soulful violin features on the multi-platinum selling PBS special, “Live at the Acropolis” have been by millions of people around the world. Her current incarnation as a leader of the landmark, all-star female band Jazz In Pink is the culmination of more than 25 year’s worth of performing with musical greats from around the world in a dazzling variety of musical styles.

While still in college, Karen began playing with the Virginia Symphony Orchestra. From there she transitioned to New York City and won amateur night at the Apollo Theatre four times. Her professional career began with a tour of the United States and Japan with Soul II Soul, followed by her Carnegie Hall debut as a soloist while accompanied by pianist/composer Dave Grusin, at an event hosted by Isaac Stern and Itzhak Perlman.  Since then, she has appeared or recorded with Stanley Clarke, Tizer, Ledisi,  Yolanda Adams, Kirk Franklin, Mary Mary, Mike Phillips, Wynton Marsalis, Patrice Rushen, Wu Tang Clan, Hidden Beach’s Unwrapped CD Series, Keb Mo, Chieli Minucci and Special Efx and many others.

In addition to her work with Jazz In Pink, Karen is now in collaboration with Iranian composer, violinist/pianist and conductor Shahrdad Rohani, featuring dueling violins in a live-string orchestra setting. Her current CD, “Soulchestral Groove” highlights the intensity, fire and brilliance for which she is so justifiably acclaimed. It’s available at your favorite music outlet.

Treat yourself to the warmth, strength and integrity of Karen Briggs’ personality and playing by clicking on the player.  Check out her performance with Jazz In Pink in the video below. You’ll be glad you did.