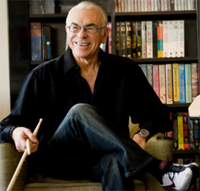 The next time you listen to a CD, thank Larry Rosen and Dave Grusin. The company they founded, GRP Records, known as The Digital Master Company was the first non-classical company in America to release compact discs. GRP became the first record company to adopt digital recording technology for all its releases and to issue every release on CD worldwide as the new format was just taking off.

“It was an interesting moment in time to see this opportunity in the marketplace that the majors weren’t embracing at all,” Rosen recalls. “Being a guerrilla company, we jumped right into that space, which helped establish GRP as a label and a lifestyle brand. We had a sound and style at a moment in time like a Motown or Stax.”

Rosen began his musical career as a drummer with the Newport Youth Band and met future partner Dave Grusin while working with singer Andy Williams and attending the Manhattan School of Music. Operating in the early ’70s as Grusin/Rosen Productions, the pair built a solid reputation through production work for RCA, Columbia, Blue Note and CTI. That prompted then-Arista chief Clive Davis to propose a joint-label venture. GRP/Arista ignited the careers of such artists as Angela Bofill, Dave Valentin and Tom Browne. Then in 1982, Grusin and Rosen established GRP as an independent label.

“We mortgaged our houses to borrow money to start the company,” Rosen says. “Our lawyers and financial advisors advised against it, saying that two musicians starting a label was the worst possible formula for success.”

GRP went on to earn 80 Grammy Award nominations, 33 Grammy wins and was named Billboard’s top contemporary jazz label for five consecutive years. In 1990 Grusin and Rosen decided to sell the company to MCA, staying on through 1995 to run it. Larry Rosen’s visionary, entrepreneurial spirit continues to drive his quest for new and exciting ways to present the music he loves to the world. Hear us talking about all this and much more in our 30-minute conversation with music by clicking on the player above.