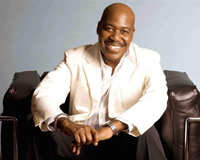 Whenever you want to set the mood for love and romance, Will Downing’s your guy. He’s been doing it for the past 25 years with hits like “A Million Ways,” “I Go Crazy,” and “Stop, Look, Listen To Your Heart.”  Downing’s “All the Man You Need” received a Grammy Award nomination for Best Traditional R&B Album in 2000 and there are multitudes of his female fans who feel the same way about him. His new CD “Silver” continues in the same tradition, with most of the songs written by Will and delivered in his smooth baritone with sophisticated charm.

Listening to his effortless, seductive crooning you’ll find it hard to believe that just a few years ago he was doing his singing from a wheelchair. In early 2007, Will contracted a rare muscular disease, Polymyositis, which sidelined him for most of the year. It was a devastating attack, forcing him into a wheelchair for most of the year, and causing him to lose nearly 100 pounds. Now fully recovered, he continues to write, produce record and tour, delivering the sensual and soulful romantic vibe for which he is justifiably famous.

Click on the player above to hear our conversation about his creative process, the illness and his perspective on life, along with several tracks from the new CD “Silver” which celebrates his 25 years as a performer and major influence on the love lives of countless couples. Visit his website here.