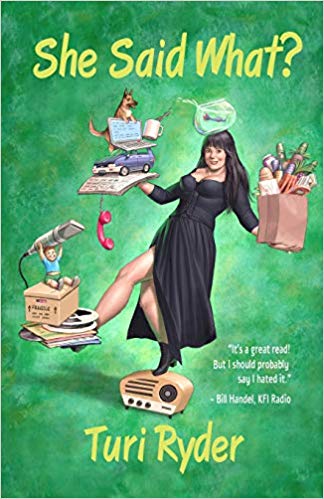 Radio.
It’s almost as easy as marriage and motherhood.

The excitement of a career on the air! Listeners asking for advice on dressing their girlfriends in leather bustiers; managers who believe every professional woman longs for a bouquet on Secretaries’ Day; Saturday nights giving away free T-shirts and beer in country music bars; reporting on a day in the life of a dominatrix–all while juggling two kids, rescue dogs, and one cross-country move after another.

Live the dream with Turi Ryder, a music jock and talk host on major-market stations from Chicago to Los Angeles, with stops in Minneapolis, Portland, and San Francisco along the way. This darkly comical, bitingly accurate, and lovingly fictionalized memoir will ring true for anyone who has longed for both a creative life and a family to come home to. More info here.

“A Brilliant and hilarious book about the late great world of radio, written by a woman who knows it as well, if not better than anyone who’s ever worked in it. Turi shows the truth of the work and the frustration of the environment. Every single paragraph is packed with the humor we all need to survive in it.”  Phil Hendrie, Satirist

Barbara talks with Turi Ryder,
talk radio host, about her new book,
“She Said What?” (A Life on the Air) 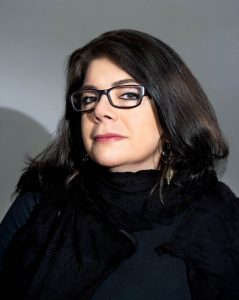 B: You were one of the first women in the US to host her own morning drive talk radio show, at KGW in Portland, Oregon. Was that part of your life plan?

T: No. My life plan was to get people to pay attention to me. I had several ideas about how to do that, but talk radio wasn’t one of them.

Talk radio, when I was growing up, was BORING. It was recipes, lost dogs, and people’s marital problems. That became less boring once I adopted a dog, learned to cook, and got married.

What’s meaningful and interesting to me now is hearing other people’s experiences. I also have a love of the ridiculous news story, but only if it’s true.

B: Women are taking a greater role in conversations, both in the public and political arenas. Have you found this to be true in radio?

T: Yes, in some ways. Women are clearly moving forward in the political sphere, and achieving spectacular success in industries like entertainment—but most of the levers of broadcasting, with a few exceptions, are still controlled by men.

Radio is, in my opinion, further behind in including women’s talent and creativity than TV and Movies. Over the decades I’ve been in radio, I’ve watched a lot of women become discouraged. Many took their entertaining, clever, got-something-important-to-say selves to other lines of work. We had bills to pay, and we couldn’t wait around for someone to figure out we’d make good program hosts.

B: You’re a radio host. Why write a book?

T: She Said What? seemed like a good way to say a few of the things I hadn’t said about how radio treats people, and how you can have a life in radio, and a life at home, and what happens when you have to make choices about succeeding at both.

For radio personalities—everything is material. Everything. When the pet store guarantees all its pets will live for a week, I have to find out whether they will take back my dead guppy. So I had been collecting stories for this book for years, without even thinking about it. I’m delighted that Tortoise Books decided publish it—but I would have kept on collecting material no matter what.

B: Are you a fan of any particular kind of music or music format?

T: I love music. But there was a lot more variety in what you could hear in over-the-air radio when I started out than there is now. The internet, and places like Citizen Planet, have made up for what commercial radio no longer does. There are also wonderful non-commercial music stations and there’s even a low power FM station near me that I enjoy. Sometimes I drive around the block if they have a song on that I like so that I won’t leave their hyper-local listening area.

I love being introduced to new music by people who are passionate about what they’re playing. If they can tell me something about the artist—I appreciate it. My tastes are diverse, but good songwriting is what draws my attention. That could be Guy Clark, or Gill Scott Heron, or Lizzo.

B: Do you think Talk Radio is different in America?

T: I wish I could understand talk radio in non-English-speaking countries when I travel. It’s one of the things that causes me great regret. It’s like a window with curtains I can’t open. I know that if I could, the view would be fantastic.

American style talk radio has evolved in two directions over the course of my career: There’s a lot more spoken word storytelling, which traces its roots back to Public Radio shows like Prairie Home Companion and This American Life. Those shows all have virtual descendants now—on the air and on the internet. That’s my favorite kind of spoken word radio.

Then there’s political talk radio, which has become so virulent and one-sided I can’t bear to listen to it—even when the host’s politics are aligned with my own.

But in other English speaking countries, where discourse tends to be more polite, it’s still a pleasure to listen to talk radio. I learn a lot just from hearing why people believe the things they believe.

Anyplace I listen, anywhere in the world, even when a belief strikes me as completely irrational, the people who hold it have reasoning that makes sense to them—given their personal experiences. Sometimes, hearing from listeners changes my opinion. That has actually happened to me more than once, and it’s something truly special about talk radio: It can change your mind.
Contact Turi Ryder here.

Available from Tortoise Books, Amazon.com
and your local bookseller. 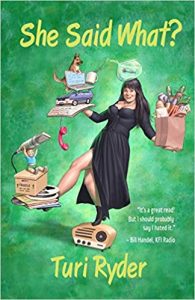 Click or tap to buy
“She Said What?” at Amazon.com