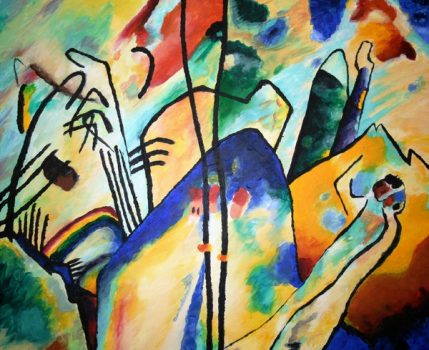 “Color is the keyboard, the eyes are the harmonies,
the soul is the piano with many strings.
The artist is the hand that plays, touching one key
or another, to cause vibrations in the soul.”
~ Kandinsky 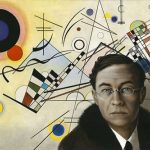 Wassily Kandinsky was born on December 16, 1866, in Moscow. One of the pioneers of abstract modern art, Kandinsky exploited the evocative interrelation between color and form to create an aesthetic experience that engaged the sight, sound, and emotions of the public. He believed that total abstraction offered the possibility for profound, transcendental expression and that copying from nature only interfered with this process.

Highly inspired to create art that communicated a universal sense of 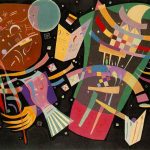 spirituality, he innovated a pictorial language that only loosely related to the outside world, but expressed volumes about the artist’s inner experience.

His visual vocabulary developed through three phases, shifting from his early, representational canvases and their divine symbolism to his rapturous and operatic compositions, to his late, geometric and biomorphic flat planes of color. Kandinsky’s art and ideas inspired 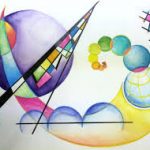 many generations of artists, from his students at the Bauhaus to the Abstract Expressionists after World War II.

He moved with the Bauhaus to Dessau in 1925 and became a German citizen in 1928. The Nazi government closed the Bauhaus in 1933 and later that year Kandinsky settled in Neuilly-sur-Seine, near Paris; he acquired French citizenship in 1939. Fifty-seven of his works were confiscated by the Nazis in the 1937 purge of “degenerate art.” Kandinsky died on December 13, 1944, in Neuilly. He had set the stage for much of the expressive modern art produced in the 20th century.