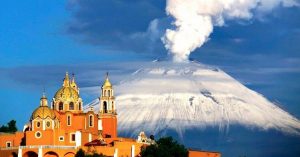 Contrary to popular belief, Cinco de Mayo is not Mexico’s

Independence Day; it celebrates the Mexican victory at theBattle of Puebla during the Franco-Mexican War, which came after Mexico’s independence from Spain, the Mexican-American War and the Mexican Civil War.

You won’t find cumin soaked ground beef hard shell tacos topped with iceberg and cheddar. But, you will find lamb barbacoa that has been smoked underground in banana leaves or carnitas topped with 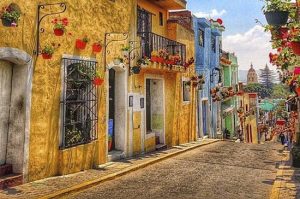 queso fresco, pickled onions and homemade salsa verde wrapped in a warm homemade corn tortilla that has been ever so lightly heated on a comal. And Puebla, just so happens to be considered by many as the gastronomic capital of Mexico.

Before Spanish explorers and immigrants swarmed Mexico, Puebla was already a culinary capital. The sacred town of Cholula known for its great pre-Colombian pyramid was also home to pre-Columbian street food. In this ancient city, vendors would set up outside the pyramid to feed those who came to worship.

After arriving in Puebla, the Spanish settled close to Cholula and created what is known today as the city of Puebla. Religion was a major aspect of Spanish conquest and convents and monasteries were set up across the city. Spanish nuns invented many of Puebla and Mexico’s most cherished dishes in these convents by integrating old world traditions with new world ingredients.

With that history in mind, here is the recipe for a famous dish from Puebla to try this Cinco de Mayo: Chiles en Nogada. 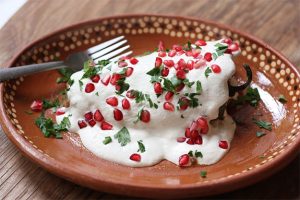