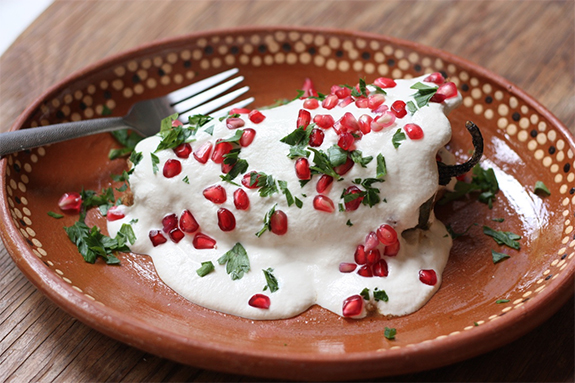 Chiles and Picadillo: Preheat the oven to 300 degrees. Place 1 tablespoon lard in a oven-proof skillet, and heat on medium-high until rippling. Add the cinnamon, cloves and all-spice, toasting for 1 minute. Add the pork roast and sear on all sides until golden brown, about 3 minutes per side. Add 2 cups water and one white onion chopped and simmer for 5 minutes. Put into the preheated oven for 1 hour. Remove from oven and let rest for 30 minutes. Cut pork into a quarter-inch dice. Set aside.

Meanwhile, chop all the apple, peaches and plantain into a quarter-inch dice. Soak the golden raisins in the sherry. Set aside.

Roast the poblano chiles on an open flame or under the broiler until blistered and blackened — 3 minutes per side if over a flame, 5 minutes per side if under a broiler. Tightly wrap the chiles in a clean dry towel and let them “sweat” for 15 minutes. When chiles are cool enough to handle, gently remove blistered skin. Cut a slit in the side of the chile and carefully remove seeds.

Roast the tomatoes on a cast-iron comal or under the broiler until blishered and blackened and so flesh yields to touch. Peel off the skin, core and puree in a blender. Set aside.

In a large skillet, on medium-high heat melt butter. Add the chopped pork. Cook until golden brown, about 3 minutes, stirring occasionally. Then add the remaining onion. Cook until the onions are translucent, about 3 more minutes. Add the chopped apple, peaches, plantains, lemon zest and rasins and continue to cook for 5 minutes. Finally add the tomato puree, salt to taste and simmer on low for 15 minutes, stirring ocassionaly. Taste and adjust seasonings.

Stuff each chile with about 1/4 cup picadillo filling, so the chiles are full but not bursting at the seams.

Sauce: Soak the walnuts in the milk overnight. Place the walnuts, milk, sherry, queso fresco, salt and sugar in a blenderand blend until a smooth, slightly thick sauce forms. If you prefer a thin sauce add more milk.

(Optional) Capear/Lamprear: Let eggs come to room temperature. Meanwhile, lightly coat each stuffed chile with flour. Separate yolks and whites. In a clean bowl or blender beat egg whites until very fluffy. Gently fold the yolk into the whites. Heat a pan with 1/4 cup vegetable oil or lard until rippling. Dip each floured chile in to the batter and place in hot oil, cook on each side until golden brown, about 1 minute per side. Drain on paper towels. (This How to Lamprear video by Zarela will show you how.)

Garnish and Serve: Place the chiles on a platter and pour the nogada suace over them. Sprinkle with pomegranate seeds and parsley for garnish. Savor!

Share:
Senegal’s Baaba Maal – Yela, The Sounds of Africa
DNA Who do you think you are?