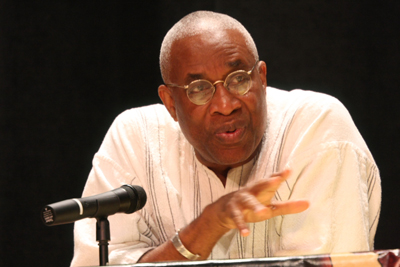 Ayuko Babu is an international cultural, political and legal consultant specializing in Pan African affairs. He has been the Executive Director of the Pan African Film & Arts Festival (PAFF) since 1992. In addition to PAFF, Mr. Babu currently serves as a permanent member of the jury of the annual Africa Movie Academy Awards (AMAA), headquartered in Lagos, Nigeria. AMAA is the world’s largest Pan African film awards event, covering the continent of Africa and its worldwide Diaspora. From 2016-2018, Mr. Babu served on the California Film Commission. In 2015, Mr. Babu was honored by the California Legislative Black Caucus for his work as founder and executive director of the Pan African Film & Arts Festival as part of the Black History Month Celebration “A Century of Black Life, History and Culture.” The special ceremony was held on the floor of the State Assembly at the state capitol in Sacramento, California. Mr. Babu was nominated for this honor by the Honorable Holly J. Mitchell, State Senator (D-30th District).Currently he is developing formal ties with the National Film and Video Foundation (NFVF) of South Africa, a government agency whose mission is to develop and promote the South African film industry. In December 2010, he was an official delegate to the World Festival of Black Arts and Cultures in Dakar, Senegal. In 2013, he was a presenter and delegate at the Travelling Caribbean Film Showcase in Havana, Cuba. Under his leadership the Pan African Film Festival has established institutional ties with the Pan African Festival of Cinema and Television (FESPACO) in Ouagadougou, Burkina Faso, the world’s largest Pan African film festival held bi-annually. He also works with the Africano Film Festival in Milan, Italy, the Zanzibar International Film Festival in Tanzania, where he has served as a member of the jury, and the Rwanda Film Festival in Kigali, Rwanda, where he served as a member of the jury. He was a presenter at the UNESCO Conference on Images of the South and was a guest of Fund South at the 2004 Cannes Film Festival in France.
In past years, Mr. Babu was a consultant to the late Bishop H.H. Brookins, of the African Methodist Episcopal Church when Bishop Brookins’ district covered southern Africa. He was also a consultant to the late Mr. Dick Griffey, President of the African Development Public Investment Corporation and SOLAR Records. In 1977, he was a consultant to Stevie Wonder and helped facilitate Mr. Wonder’s participation at FESTAC (the 2nd Festival of Pan African Arts and Culture) held in Lagos, Nigeria. At FESTAC, among other activities, Mr. Babu helped coordinate the satellite transmission of Mr. Wonder’s GRAMMY appearance from Lagos.

In 1984, he brought the famed Les Ballets Africains de la Republique de Guinee to the Olympics in Los Angeles. He was Co-Chair of the Program Committee for The Nelson Mandela Reception Committee at the Los Angeles Coliseum in 1990, appointed by Congresswoman Maxine Waters.